The appearance day of Srila Prabhupada, the founder-acharya of ISKCON is celebrated as Vyasa Puja. Srila Prabhupada was born in 1896 on the day of Nandotsava (the next day of Janmashtami). 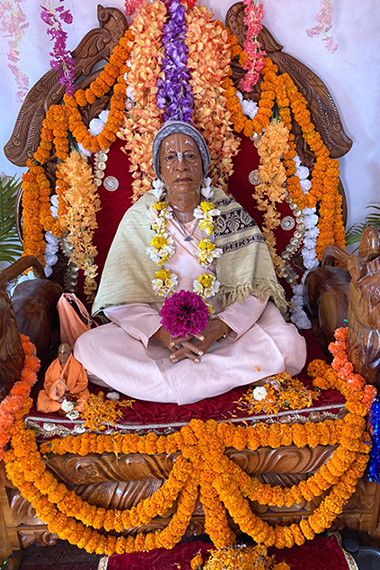 Srila Prabhupada was sent by the Lord to fulfill Caitanya Mahaprabhu’s prediction- Prtvithe ache yata nagaradi grama, sarvatra pracara haibe more nama: In every town and village of the world, My name will be heard.

Srila Bhakti Vinoda Thakura wrote in his Sajjona-tosani, “Soon there will be a time when the chanting of Krishna’s name will be heard in England, France, Russia, Germany and America.”

The Vedas originate from the Supreme Lord Sri Krishna. Lord Sri Krishna imparted the Vedic knowledge to Lord Brahma, the creator of this universe. Brahma instructed his son Narada, who in turn gave this knowledge to Vyasadeva. Vyasadeva compiled the Vedic knowledge and also composed the eighteen puranas. Under the instructions of his spiritual master Narada, he also authored Srimad Bhagavatam, which is called the spotless Purana. He distributed this knowledge throughout this world through his disciples.

A bona fide spiritual master coming in this line of succession descending from Vyasadeva is considered a representative of Vyasa deva. Srila Prabhupada is the 32nd acharya in this disciplic succession and his disciples observe his appearance day as Vyasa Puja. Devotees read homage offerings written by them to glorify Srila Prabhupada.

Srila Prabhupada appeared to fulfill the mission of Lord Krishna. Srila Prabhupada grew up as a pure devotee of the Lord and distributed Krishna Consciousness everywhere.

Srila Prabhupada made a perfect appearance, led a perfect life and had a perfect departure. Srila Prabhupada lives forever through his books. This legacy will always provide the devotees with Lord Caitanya katha and teach everyone to chant the Maha mantra.