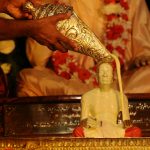 His Divine Grace A.C. Bhaktivedanta Swami Prabhupäda, at the advanced age of seventy, suffering two major heart attacks, traveled under great hardship from India to America and established the International Society for Krishna Consciousness in 1966 at New York. In twelve short years, he circled the world fourteen times; started temples, ashramas, schools, and farms on six continents; wrote more than seventy books; and literally introduced millions of people to the chanting of the Hare Krishna mantra.

In appreciation of his divine work, his disciples, followers and admirers fill their hearts with gratitude by glorifying his humanly impossible achievements and reinforce & reaffirm their faith on their bonafide spiritual master, Srila Prabhupada, on his auspicious appearance day.

A bona fide spiritual master coming in this line of succession descending from Vyasadeva is considered a representative of Vyasa deva. Srila Prabhupada is the 32nd acharya in this disciplic succession and his disciples observe his appearance day as Vyasa Puja. For the devotees of ISKCON this is the most important festival of the year. Devotees fast till noon. Various items are cooked for offering to the spiritual master, who in turn offers it to Krishna. Devotees read homage offerings written by them to glorify Srila Prabhupada. A grand abhisheka is performed and prasadam is distributed.