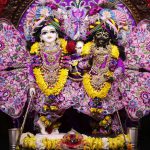 The day when Lord Krishna took birth is called as Janmastami. The Janmastami festival is celebrated by millions of people every year all over the world. During the birth of Lord Krishna, the whole atmosphere became filled with prosperity and joy. The trees were laden with fruits and flowers.

The rivers were overflowing with water, and the lakes were beautifully decorated with lotus flowers. The birds in the forest began to sing with sweet voices, and the peacocks began to dance. The wind blew very pleasantly, carrying the aroma of different flowers. All the people’s minds became filled with peace and joy.

The denizens of the heavenly planets began to sing, offer prayers and dance on the auspicious occasion. The heavenly residents being pleased also began to shower flowers. At the seashore there was the sound of mild waves, and above the sea there were clouds in the sky which began to thunder very pleasingly.

Amidst such a wonderful atmosphere, Lord Krishna in order to protect his devotees took birth as the eighth child of Devaki and Vasudeva, bringing boundless joy to both of them.
Srila Prabhupada on Lord Krishna’s appearance
“Although the Lord appears on schedule, namely at the end of the Dvapara-yuga of the twenty-eighth millennium of the seventh Manu in one day of Brahma, He has no obligation to adhere to such rules and regulations, because He is completely free to act in many ways at His will. He therefore appears by His own will whenever there is a predominance of religiosity and a disappearance of true religion.” – BG 4.7, Purport
Sri Krishna Janmashtami Celebrations begin at ISKCON, Mysuru from early morning 4.15 am onwards and continue up to 1 am the next day. Sri Krishna Balarama, the presiding Deities of ISKCON Mysuru are be bedecked in a special decoration for the occasion. Darshan is open throughout the day. The special attraction during Janmashtami celebration is the elaborate Maha-abhisheka to Sri Krishna Balarama which begins at 10 pm and culminates with Maha Mangala arati & Sankirtana at 12 Midnight, coinciding with the time of Krishna’s birth.

As part of the Janmashtami celebrations, throughout the day many singers perform Sangeethotsava seva during festival in the main temple hall. In the evening, a devotional musical concert and a special dance drama is arranged based on pastimes of Lord Krishna. A special feature of the festival is the HARINAM MANTAP, were thousands of visiting devotees are introduced to the chanting of the Hare Krishna maha mantra.